Mourning Cloak | Introducing: The Butterfly of the Month! 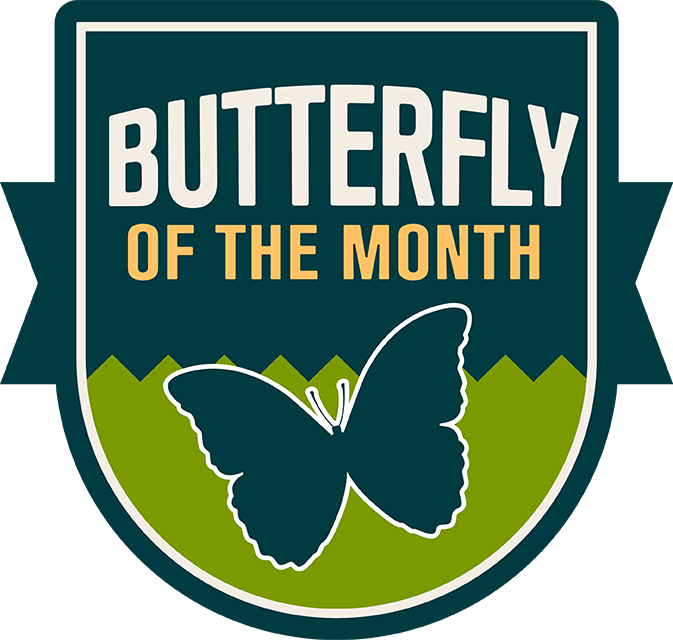 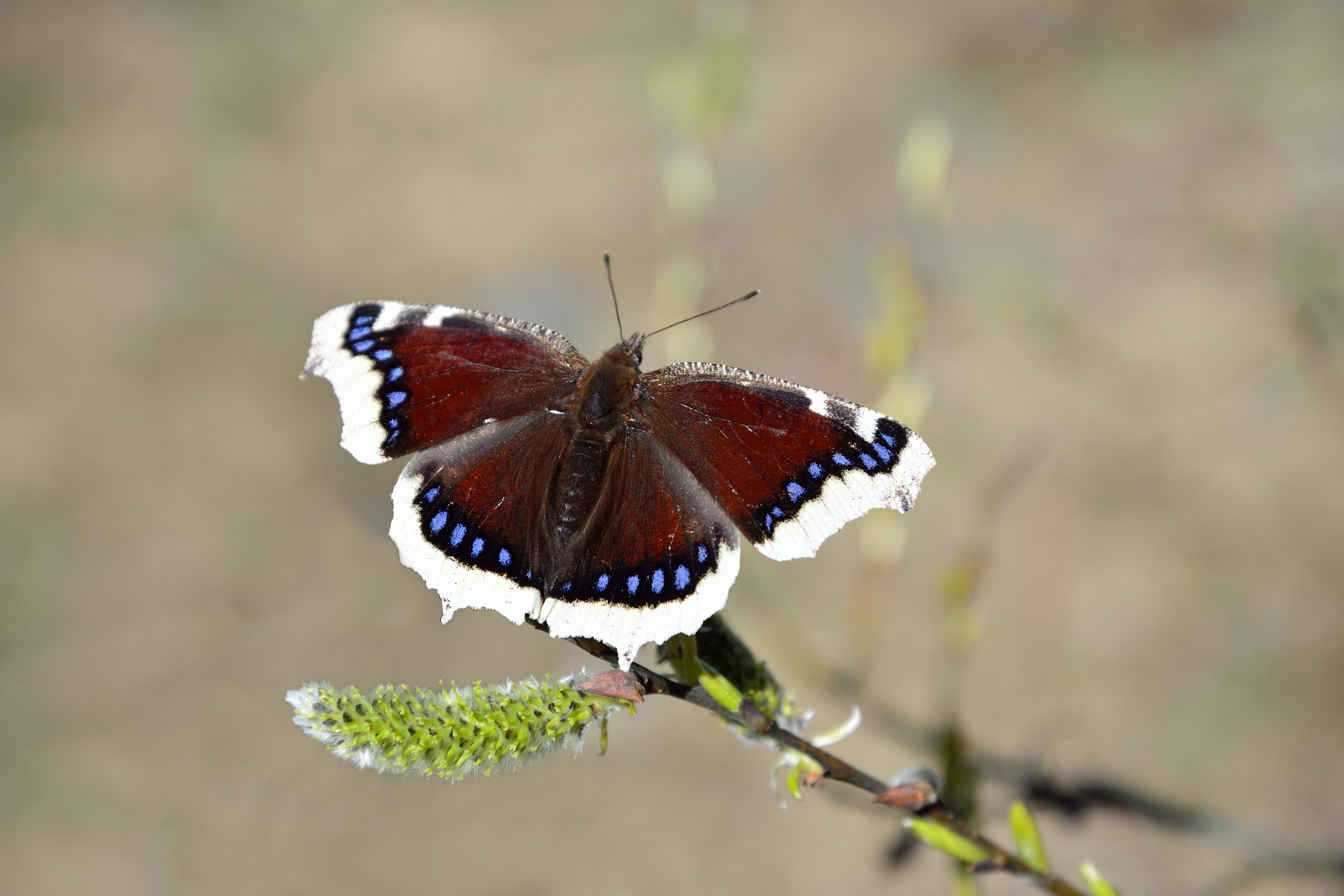 "One of these early spring butterflies seen in Okanogan County is the Mourning Cloak (Nymphalis antiopa). Identified by their striking yellow borders on the dorsal side of the wings with lines of blue dots bordering the yellow on a rich deep brown background. Coloration of the ventral side of the wings is mostly a mottled dark brown with a creamy yellow border, such that when the wings are closed and the butterfly in among dead leaves it is nearly invisible. 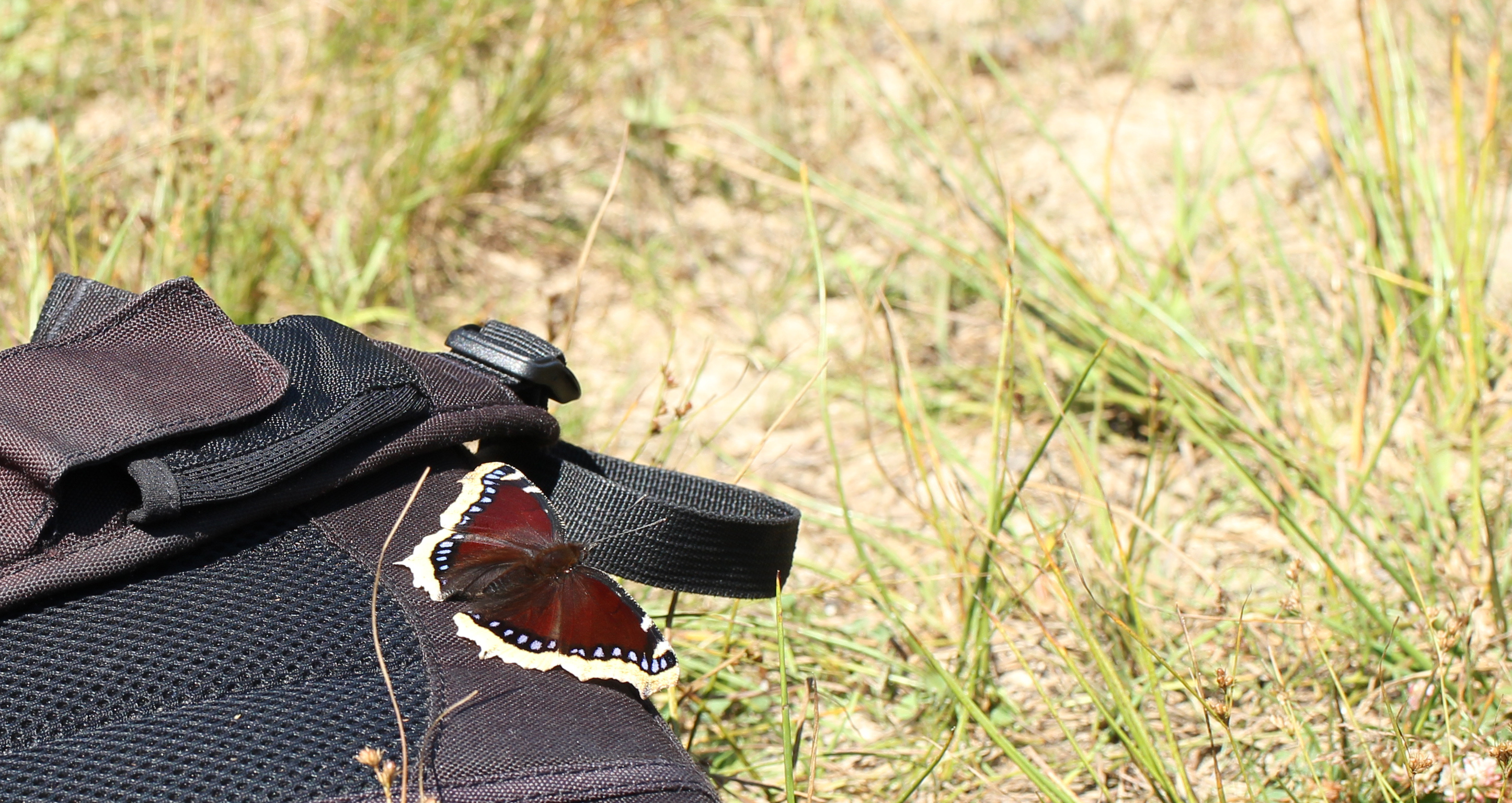 Mourning cloaks are one of 7 butterflies found in the Okanogan that overwinter as adults. I have found them hibernating under logs and in seemingly enclosed areas. After hibernation, they emerge in early spring (late March) and begin foraging. They have been noted feeding on carrion, scat, rotting fruit, sap, and occasionally flowers. After mating the females lay eggs in masses of 100-200 primarily on willow species, birch, aspen, and a few other species such as hawthorn, rose, and maple.

After the eggs hatch the caterpillars feed on the host plant undergoing several stages of development until they form a cocoon or chrysalis. Eventually, the adult butterfly emerges and feeds until winter, starting the cycle again.

Becoming aware of the local butterflies opened a whole new world to me. It is wonderful to see these bits of color flitting about or nectaring on and pollinating flowers." 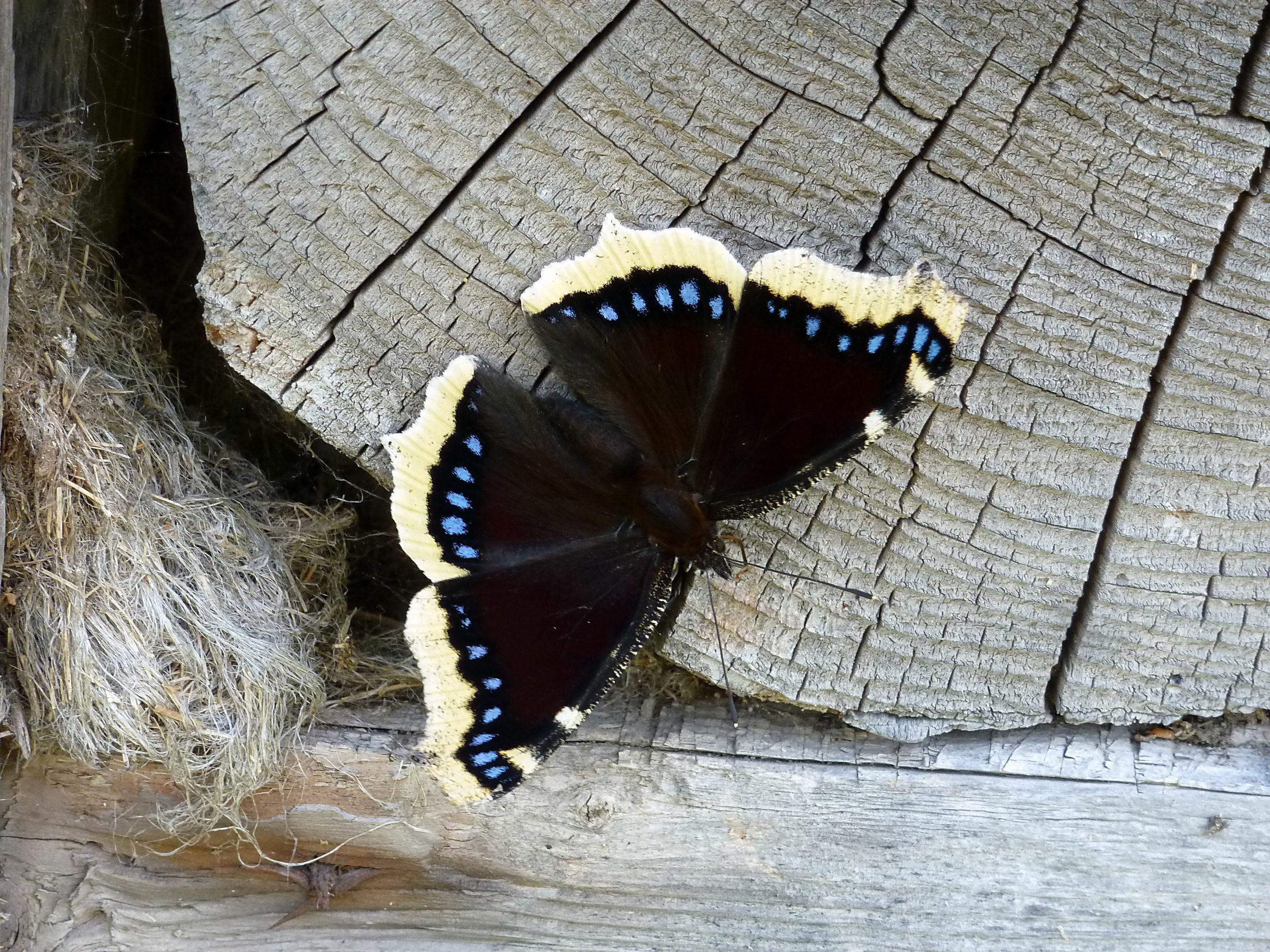 Welcome to our Butterfly of the Month!

We are happy to introduce Dale Swedberg! You may have noticed a few words from him in our e-news in recent months. Dale has been an invaluable source of some of the greatest secrets that our county and its wildlife keep tucked away most of the time. Stay tuned for more!

Here's a little background so we can get to know Dale Swedberg better!

"When I first started as manager of the Sinlahekin Wildlife Area in 1997 I had a general idea of what species of wildlife could be found there. My philosophy about being a fish and wildlife habitat manager is that a manager needs to know what species of Flora (plant life) and Fauna (animal life) use the habitat in the area they are managing. Plus know the life histories of the Flora and Fauna and the dynamics of the habitat they are dependent upon.

In order to know what Flora and Fauna existed on the Sinlahekin I began compiling lists of birds, mammals, reptiles and amphibians (collectively called herptiles), and fishes. In addition, I was able to get a grant to have a survey of the vascular plants completed. This 2003 survey was done by Dana Visalli and as part of the survey report, he included a list of 33 butterfly species he saw and identified. Also in 2003 I met a lepidopterist from Canada, Norbert Kondla, and invited him to the Sinlahekin to do a butterfly survey, which he did document about 25 species of butterflies.  Thus began my education about butterflies, I even bought a net and viewing jar, and during this time I learned a lot about butterflies. One thing I learned is - that if I’m unaware or not looking for them I won’t see them. Nearly everybody notices the fairly large, yellow with black stripes, swallowtail butterflies often incorrectly calling them Monarchs. The small fast-moving skippers, blues, crescents, and hairstreaks are often missed by people who are unaware of them. Often I am alerted of their presence by a shadow rapidly moving across the ground before I see these wee butterflies.

In 2004 two Central Washington University students, Caitlin Labar and her sister Rebekah were Interns at the Sinlahekin. Caitlin added substantially to the list of Sinlahekin butterflies.

In 2019 Caitlin published a guide to ‘Butterflies of the Sinlahekin Wildlife Area with Summaries of other Okanogan County Butterflies.’ It has maps and photos of the butterflies and their caterpillars. It is a great resource. Caitlin also developed a “pocket” field guide for butterflies that is much easier to carry in the field. Another excellent reference is Robert Michael Pyle’s ‘Butterflies of Cascadia’. The Okanogan is a favorite butterflying area for the Washington Butterfly Association.

There are 7 species of butterflies that overwinter as adults. These will be the first seen in the spring."

To learn more about the Mourning Cloak,

Have you Spotted Wildlife in

Send us your pictures and tell us a little bit about your experience ~ your animal might just be next week's pick! 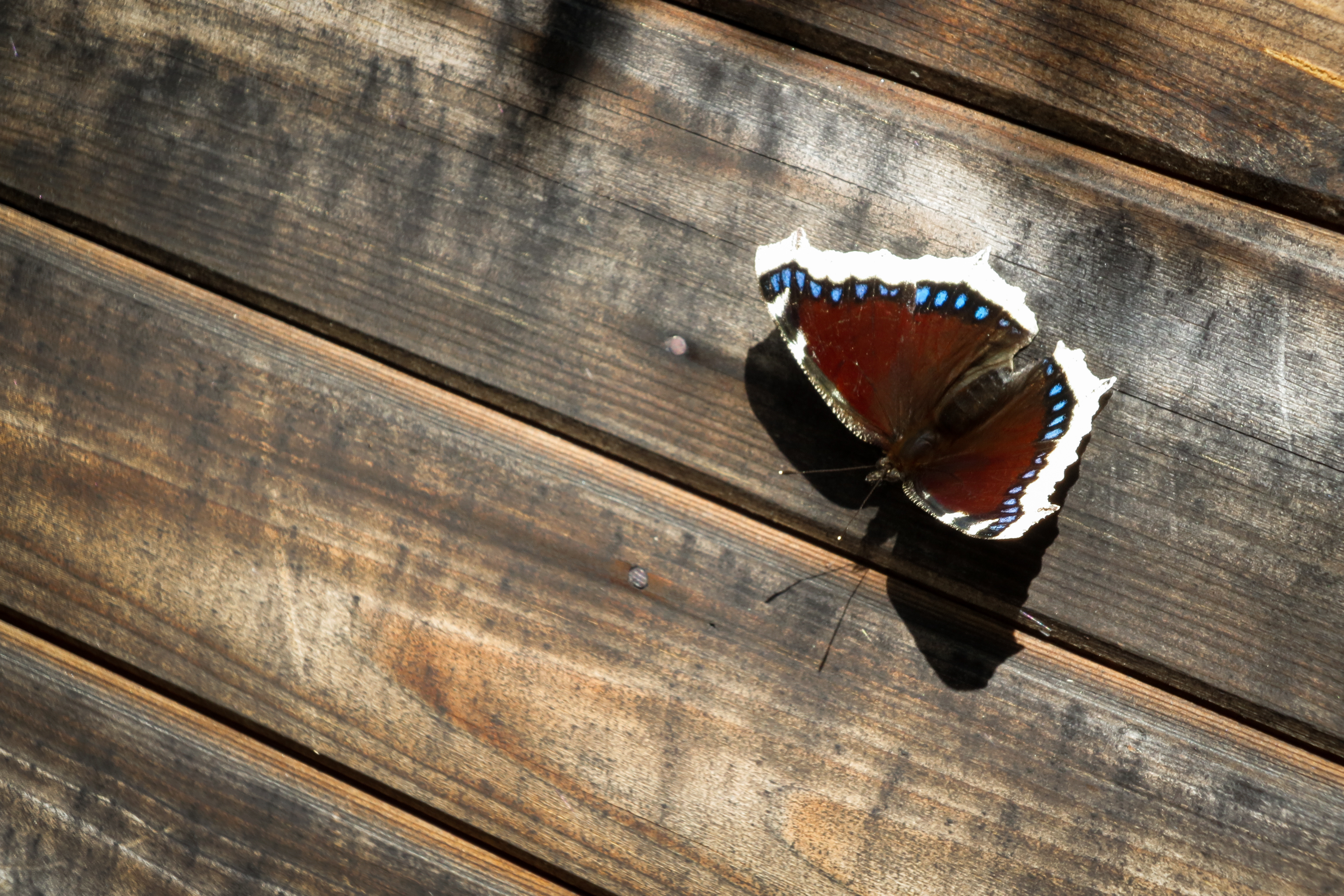 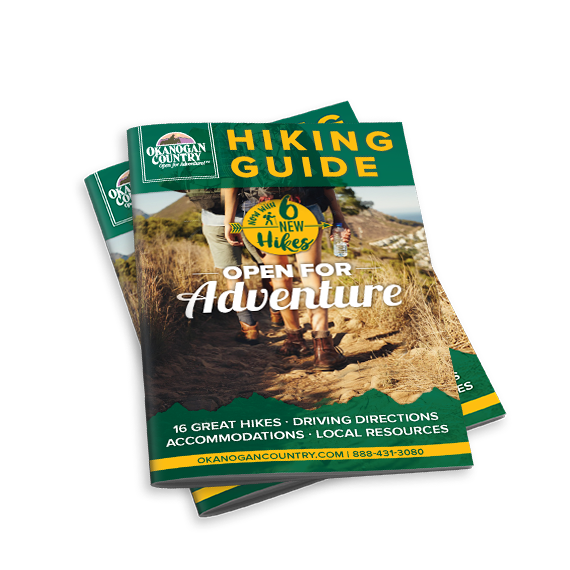 Order a Hiking Guide and View Our Wildlife All Year Long.

Browse all our available guides, then order and download them for free!

Have you checked out our free maps and guides yet? There is lots to see & explore!